Recently MennoMedia’s marketing director, Ben Penner noticed a huge spike of visitors on our Google Analytics for Third Way Café website on July 7. My mind immediately sorted back through what was in the news about Mennonites at that time? Um … something about Mennonites, Canada, Manitoba, assaults against children? 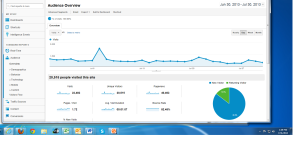 Yes. A story about more charges in an assault case broke there July 4—and by July 7 (when folks in the U.S. were finally getting back to their computers from the long U.S. holiday weekend, I surmised) perhaps that was what drove the traffic at Third Way Café to its highest peak in six months: over 3,400 visitors in a single day. The previous huge surge was Nov. 12, 2012, which we attributed (almost without a doubt) to the final episode in the Breaking Amish reality TV show series. 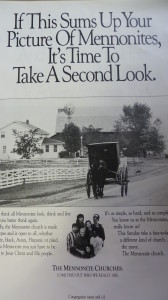 Poster from an earlier stereotype-busting print campaign by Mennonite churches.

Last fall we noted a weekly mini-spike as each episode aired on Sundays from Sept. 9 to Nov. 11. We saw similar mini-spikes each week for Amish Mafia. Is that good? Please share your thoughts and comments if you can attribute the traffic to other “Mennonite/Amish” news/events. We’re open to other interpretation/guesses!

I’ve been following these spikes for years and have reported on them formally and informally in news releases and in “look at this” e-mails to my co-workers. Instead of being happy, though, they make me sad because so many of the happenings that drive people to find out more about Mennonites are tragedies:

But the reality TV shows featuring Amish lead very often to regular surges every time an episode airs, which is disturbing, but maybe good in another kind of way. Sad that it took a reality TV show to propel people to seek more information, but good that a site like Third Way Café exists. Obviously there are hundreds of sites including all of the agency/institutional sites for our denominations (Mennonite Church USA and Mennonite Church Canada) but the agenda for agency sites is more about helping the constituency understand, access and interpret agency resources and people, while Third Way Café is more about giving accessible information to the general public: in content, in language used (no Mennonite alphabet soup on the site, I hope), in issues addressed. 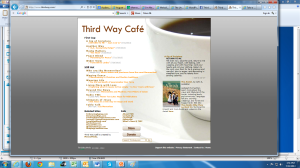 Next time we’ll look more in depth at what content most people access first when they do visit Third Way Café.