How does a Christian veteran deal with the horrors he or she witnessed in war? How can a Christian reconcile faith and killing? 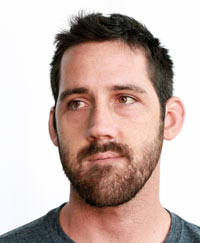 When I first saw we at MennoMedia/Herald Press were publishing a book by a veteran of the Iraq war, I thought, oh wow, that’s interesting. I assumed it would be all about how war is terrible and soldiers can’t be Christian and the military is a giant industrial complex, right? And the world would be much better off if people were all pacifists like most Mennonite-Anabaptists.

I mean, MennoMedia and Herald Press are supposed to be Anabaptist-Mennonite media producers and that’s what we do, right?

In For God and Country (In That Order): Faith and Service for Ordinary Radicals,

Logan Mehl-Laituri has compiled quite a remarkable roster of what he calls “soldier saints and patriot pacifists” from the “front lines of church history.” He himself has been a soldier, a patriot, a Christian, and now, a conscientious objector to war—but wants everyone across great divides to try and understand each other.

A press release for the book calls it “likely the first book written by such a recent war veteran published by the Mennonite/Anabaptist/pacifist publisher.”

Earlier he told his own fascinating story, Reborn on the Fourth of July: The Challenge of Faith, Patriotism and Conscience by Intervarsity Press, 2012. It earned a starred review in Publisher’s Weekly.

Here Logan tells some of his story.

If these intriguing labels don’t whet your appetite, maybe this will:

“This book is like a Hall of Fame for Christian soldiers and peacemakers, written by one of my favorite veterans for peace.  Logan reminds us that making peace is as costly as waging war, and if we aren’t prepared to pay the price for peace like the folks in this book, than we should sadly confess that we never really believed that the cross is an alternative to the sword.”  –-Shane Claiborne; author, activist, and Christian peacemaker

If you believe that we must come together across the many divides that cross Christians (and society) up, you owe it to yourself to buy, share and tell others about this book.

What do you think? Do you feel a conflict between being a faithful follower of Jesus, as well as loyal to the country in which you live? Where do these feelings and experiences get discussed? Do you feel alone in your positions?