By Rose Stutzman, director of Shine

The prayer of Janis refers to Janis Joplin’s song “Oh Lord won’t you buy me a Mercedes Benz?” As you may have guessed, it is not in the Shine curriculum, designed for age three through junior youth. The song also asks the Lord for “a color TV” and “a night on the town,” and continues “prove that you love me and buy the next round.” I assume that Janis was being sarcastic in this song recorded three days before her death. Singing the song is a critique of a world rife with consumerism.

The prayer of Jabez is found in 1 Chronicles 4:10:

The Prayer of Jabez, by Bruce Wilkinson, is a book based on this short verse about one of the descendants of Judah. The book encourages Christians to expect God to answer our prayers for blessing. While not nearly as blatant as Joplin’s song, the book promises success, and at least in part those successes can be measured by what you can acquire. A 2005 reprint claims that the book has sold more than 10 million copies. Certainly the book’s sales “enlarged the borders” of Multnomah Publishers. Considering the struggle of Christian publishers to stay afloat, the success of this book is no small thing. (In 2006 Multnomah Publishers was acquired by the Christian division of Random House and became WaterBrook Multnomah.)

Shine curriculum does not include the prayer of Jabez but does include another lesser-known prayer from the Old Testament: the prayer of Agur from Proverbs 30.  Agur asks God for two things: he asks for integrity (“remove far from me falsehood and lying”) and Agur asks for enough (“give me neither poverty nor riches—feed me with the food that I need”). In many ways the prayer of Agur reminds us of a line from the prayer Jesus taught the disciples, “Give us this day our daily bread.” (And yes, the Lord’s prayer is also included in the Shine curriculum. So the correct answer to the beginning question is C and D.) 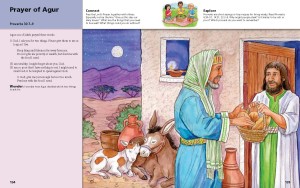 The story “Prayer of Agur” in Shine On: A Story Bible

I often wonder about the times Jesus went off to pray by himself. Did Jesus pray for enough compassion to love his enemies? Enough strength for another day of crowds seeking healing? Enough courage to face suffering and death?

I can imagine that Jesus prayed for the rich man who went away sad, and surely he prayed for his followers to love each other. The story of Jesus’ temptations in the wilderness shows us that Jesus chose against worldly power and glory. Jesus’ goal was God’s kingdom of reconciliation and wholeness, not a kingdom of triumphing over others.

Your kingdom come. Your will be done, on earth as it is in heaven. Give us this day our daily bread.  And forgive us our debts, as we also have forgiven our debtors. And do not bring us to the time of trial, but rescue us from the evil one. —Matthew 6:10–13.

How we pray shapes our lives. Both the prayer of Agur and Jesus’ prayer “for daily bread” remind us of God’s generous provision. We can share with others so that they too have enough. 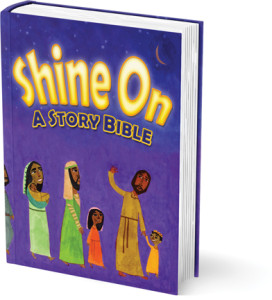 A Story Bible with the caption “Shine On: A Story Bible has gone to press. Congregations should plan to purchase Shine On: A Story Bible for each Primary, Middler, and Multiage group. This story Bible is an integral part of the curriculum and an important home connection. Plan now to buy Shine On as a presentation gift for the families in your congregation. Our dream is for each household to have a copy of Shine On to further strengthen faith formation opportunities at home. Watch for special quantity offers on ShineCurriculum.com. 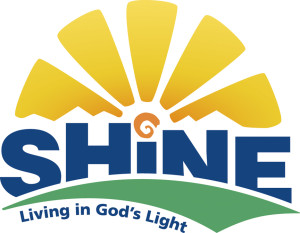 Shine: Living in God’s Light is coming soon. Sample sessions will be available for preview online by end of January. The first quarter is planned for use in Fall 2014 but will be off the press and available by end of March for Christian education committees to purchase and preview.

What do you expect to find in an Anabaptist children’s curriculum? 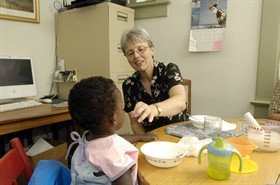