Recently, I attended the Pacific South West Mennonite Conference’s (PSWMC) Winter Delegate Session, held at First Mennonite Church, Upland, Calif., one of 21 area conferences in Mennonite Church USA. I spent time visiting churches and donors in advance of the meeting and helped Barbara Eby, resource advocate for the conference,  set up a book table. PSWMC is one of the most diverse of MC USA’s 21 regional bodies. 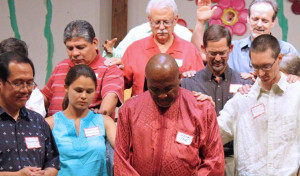 More than 11 languages are spoken in Pacific Southwest Mennonite Conference

While interacting with customers browsing the book tables I came to know Clifton Carter and to recognize the impact a book can have. Clifton shared his testimony with me. He told me he grew up in Maryland and “got sober” through the ministry of the Church of Christ (Boston Movement) which traces its origins to America’s Second Great Awakening (1790-1870) and the Stone-Campbell Restoration Movement. Some claim the Church Of Christ International is a cult, in that it exerts undue influence over its members and brainwashes them. I am not an authority on such matters but trust this brother’s testimony that he was released from his addiction through the church’s ministry.

In 2004 Clifton first heard about Anabaptism from one of the church’s pastors, who referred to it as a movement of the Holy Spirit to restore the purity of the early Church. However, Clifton understood from the preacher that the Anabaptist movement had died. He was surprised then to learn more about Anabaptists and discover they are still very much alive in the Mennonite Church and in other forms. He and his mother attended a conservative Mennonite church near his home, where the men and women sit on opposite sides of the sanctuary. He did further research and discovered Mennonite Church USA and Stuart Murray’s book from 2010, The Naked Anabaptist. He pointed to several other MennoMedia books which he has read, is presently reading, or plans to read including: What is an Anabaptist Christian? by Palmer Becker and John Roth’s books on Mennonite faith: Beliefs; Practices; and Stories. However, he confided he doesn’t have any money for books right now. 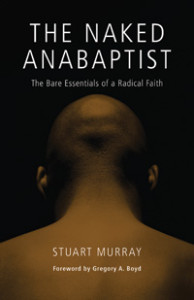 I joined Clifton for dinner in the church’s basement fellowship hall and learned more about his journey and hopes. He is in touch with PSWMC Conference Minister Dick Davis and is taking steps to become a licensed Mennonite pastor with plans to plant a church in Sacramento, where he lives. I asked Clifton, “How do you support yourself?” He rolled up his shirt sleeve, showed me a tattoo of a Bible near his wrist, and said, “I’m a tattoo artist.” Clifton is eager to learn Mennonite/Anabaptist thinking. He has already read many of MennoMedia’s Herald Press titles and plans to take a series of five classes, taught by leaders in PSWMC, designed to prepare people for pastoral ministry in the Mennonite church.

Reflecting on my time with Clifton, I realize the impact a well-written book can have. In 1958 Herald Press published a book titled God Uses Ink by John A. Hostetler which tells the story of the first fifty years of Mennonite Publishing House which, in 2011, merged with Third Way Media to form MennoMedia. In 1978, Hubert R. Pellman wrote and published the history of Mennonite Broadcasts First 25 Years, the predecessor organization of Third Way Media. I believe God is still using ink, digital signals, film/video, music and a host of faith formation resources to draw people closer to Christ and encourage them to follow Jesus, the Prince of Peace. That’s one of the reasons I enjoy working for MennoMedia and promoting its mission. God is using the products we produce to change people’s lives.

What Mennonite books or films have been particularly influential in your life?
Are you reading any Herald Press books now? If yes, what do you like about them?
Are there books you would recommend to someone exploring the Mennonite faith?