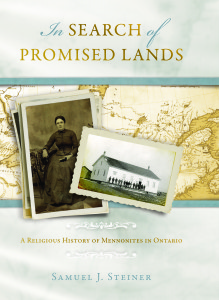 As I waded into a six-year project on writing the history of Mennonites in Ontario, I had to think carefully of how I stood in relation to the subject matter. I knew that no historical writing is objective. Each interpreter of past events is shaped by personal heritage, training, and beliefs, not to mention the resources available when making that interpretation. I decided I should be as transparent as possible in describing my perspective and my place in this history of Ontario Mennonites. 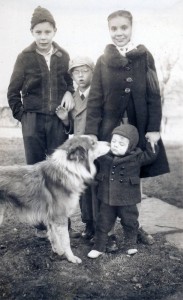 Sam with older siblings on the farm.

My family upbringing was in an Eastern Ohio Mennonite home, first on a small mixed farm of eighty acres and from age ten in a small town. My father was a Mennonite bishop and my parents were both schoolteachers. In my teens I took an extremely critical view of faith, especially Mennonite faith. Nonetheless I attended Goshen College in Indiana, where I had mixed success academically but had the good fortune to meet my future spouse, Sue Clemmer. 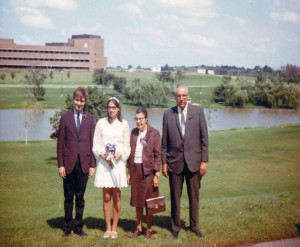 Through a series of events, including expulsion from the college, I became a political radical and eventually a draft resister, refusing induction into the U.S. military in April 1968. 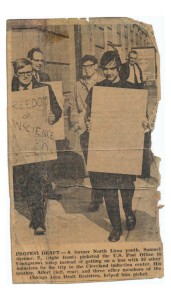 A key shaper of that direction in my thought was participation in the last day of the Selma to Montgomery, Alabama, civil rights march in March 1965. I arrived in Canada in late October 1968 as a refugee still alienated from the church of my birth. This story has been interpreted in a drama by Rebecca Steiner [distant cousin], Gadfly: Sam Steiner Dodges the Draft, put on in various places and published by Theatre of the Beat in 2012. 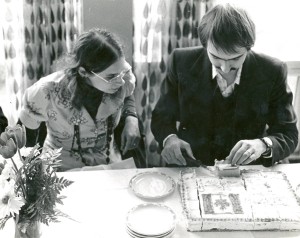 Through the actions of many within the Ontario Mennonite community I found my way back to the church in the early 1970s and became engaged with Anabaptist and Mennonite history, especially as taught by professors Frank H. Epp and Walter Klaassen at Conrad Grebel College. This led to seeking and obtaining the first paid archivist position at the Mennonite Archives of Ontario at Conrad Grebel College in September 1974, where I remained until retirement in December 2008. Those were rich years during which my hands sifted through an enormous pile of documents, photographs, books, sound recordings, and visual recordings that related to the religious and cultural life of Mennonites in Ontario. 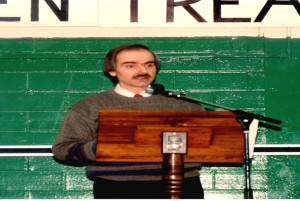 This brief personal history reveals several things: First, I did not grow up with Ontario Mennonite history in my blood; it came through my work and church life, though my family history gave me a sense of familiarity with the culture of those Ontario Mennonites descended from Amish and Pennsylvania Mennonite backgrounds. 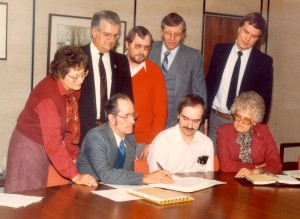 Second, I am a culturally assimilated Mennonite, though I have been submerged in Mennonite church and denominational life more than most other assimilated Mennonites. This surely affects my objectivity, but in this book I have worked hard to respectfully describe those groups that emphasize greater separation from the world or that come from other cultural backgrounds.

Finally, my history also reveals I am not a trained academic historian. I am an archivist who spent years among the individual trees of the Mennonite forest, gathering and preserving the leaves that told particular stories. I am not a detached observer. I do not approach the history of Mennonites in Ontario as a social historian or as a theological or intellectual historian, though issues of boundaries between church and culture and the influence of theological movements on Mennonites inform my historical observations.

Because of my many years of working within denominational structures and in the formation of the Mennonite Conference of Eastern Canada, I am particularly fascinated by the workings of church structures and the role of individual stories and events that have led church members to make different decisions about the cultural and theological directions of their church. For these reasons my subtitle describes this work as a “religious history” of Ontario Mennonites. 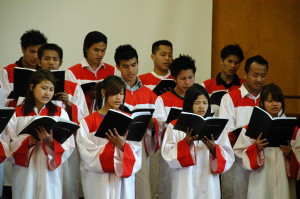 Chin Christian Choir, one of many photos in this book tracing the history of Anabaptists in Canada to contemporary times.

In many ways this project was a labor of love, and I’ve felt privileged to participate in one corner of it. I’ve watched the Mennonite world become more and more diverse. As an assimilated Mennonite with a liberal bias I welcome this, though the diversity has come with much pain in many parts of the church. Future histories will determine where this diversity has taken us.

To purchase a copy of In Search of Promised Lands: A Religious History of Mennonites in Ontario, go to the MennoMedia store or call 1-800-245-7894 in Canada or the U.S.

Sam Steiner, author. You can \also visit Sam’s blog for this project here. 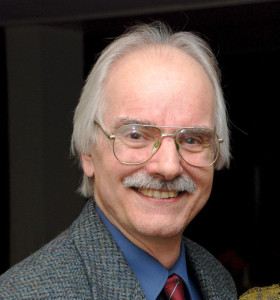 P.S. What got Sam expelled from Goshen College: 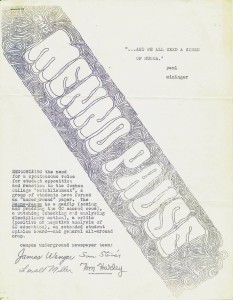