NASHVILLE, TN, January 27, 2016: Herald Press, the publisher of the bestselling 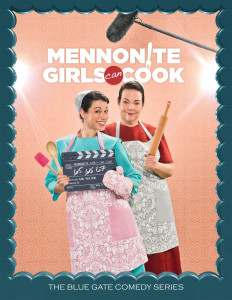 Herald Press collaborated with 10 Mennonite women in 2011 after they had garnered over 1 million followers on their blog, www.MennoniteGirlsCanCook.ca, to produce the bestselling cookbooks Mennonite Girls Can Cook and Mennonite Girls Can Cook Celebrations. The women (seven from British Columbia, two from Manitoba, one from Washington) share recipes and their faith to inspire hospitality, while donating all royalties from their books to help needy people around the world.

Blue Gate Musicals, (BGM) was formed in 2010 to create original, heartwarming, and entertaining musicals, which includes hugely successful Broadway-style musicals: The Confession, Half-Stitched, Josiah for President, and Our Christmas Dinner, with a brand new musical opening in April 2016, The Home Game.

Dan Posthuma, president and producer of Blue Gate Musicals, notes, “The authors of the popular Mennonite Girls Can Cook series have captured the hearts (and appetites) of many thousands of people with their stories of family, memories of mealtime, and testimonies of faith—including accounts of their parents and grandparents escaping religious persecution in Russia with nothing but ‘the shirts on their backs, and recipes in their heads.’ Blue Gate Musicals is pleased to take a bit of a different twist on these well-loved books, and bring them to our theaters in a fun, inspirational, and entertaining stage presentation.”

Martha Bolton, scriptwriter, notes, “I am so excited to be working on this fun project! The Mennonite Girls Can Cook brand has already taken Canada by storm, and now we get to bring them to the Blue Gate stage for this brand new, laughter-filled show that we hope will have theater-goers coming back for seconds!”

Mennonite Girls Can Cook, a comedy in one act, is full of excitement, confusion, and just plain frantic fun when a small town cable TV cooking show, hosted by two Mennonite women, attracts the attention of a Hollywood producer. “It’s an ideal recipe for hilarity, as these lovely ladies gear up for the ‘Big Time,’” says Producer Dan Posthuma. “This brand new one-act play mixes faith, food, and friendship into a comedy that really sizzles!”

Click here to buy Mennonite Girls Can Cook and here for Celebrations.

Information on shows and to buy tickets: