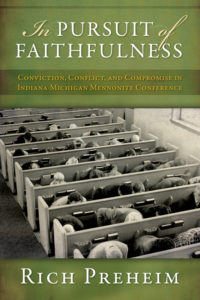 HARRISONBURG, Va., and KITCHENER, Ont.—The first Mennonite and Amish settlers arriving in Indiana and Michigan in the mid-19th century were both distinctively American and uniquely Anabaptist. They were part of a wave of settlers expanding westward in their search for new and cheaper lands, but they were also distinct in their understandings of Christian faithfulness.

In Pursuit of Faithfulness: Conviction, Conflict, and Compromise in Indiana-Michigan Mennonite Conference, a new Herald Press book by journalist and historian Rich Preheim, examines the long history of faith, conflict, and outreach that has shaped Indiana-Michigan Mennonite Conference. This narrative 420-page history is volume 50 in the Studies in Anabaptist and Mennonite History series.

“In many regards, the history of the conference is the history of the Mennonite Church,” Preheim said in an interview. The many church agencies eventually located in the northern Indiana region—educational institutions, mutual aid groups, mission agencies, and others—brought Mennonites from elsewhere. And they brought differing ideas of faithfulness that sometimes resulted in conflict and change.

They also brought new ideas of mission and outreach. “An early conflict was over Sunday school in the 1860s and 1870s,” said Preheim. As the idea took hold, Sunday schools became a tool of mission. Sunday schools were placed where no Mennonite churches existed, as the first step in church planting.

In the early 20th century, in reaction to changes in the church, many Mennonites responded with a move toward the fundamentalism of the time. Later Mennonites had to find their way through other conflicts, from divorce to the charismatic movement to women in leadership.

Significant leaders in the conference have served the broader church: John F. Funk, Harold S. Bender, and many others who helped shape the vision of church agencies and schools. The book also includes sidebar stories about notable themes and people of the conference, from the role of ministers’ wives in the early 20th century to the legacy of an early mission church in Chicago.

Through conflict, change, and new fields of endeavor, the Mennonites of Indiana-Michigan Conference have taken their Christian commitment seriously, said Preheim. His history ends in 2001, but an epilogue carries this story of faithfulness up to the present, with its own new challenges and opportunities, building on the past.

David R. Swartz, associate professor of history at Asbury University, writes of In Pursuit of Faithfulness, “Preheim tells fascinating stories about conflict over education, same-sex marriage, clothing, and vain amusements like birthday parties. This terrific book is both an accomplishment of historical recovery and a testimony to the faithfulness of God.”

Rich Preheim is the author of In Pursuit of Faithfulness, which has just been released by Herald Press. Ardell Stauffer interviewed Preheim.

Tell me about your writing background and your interest in history.

I was a history major at Bethel College, North Newton, Kansas. I have worked as a journalist with Mennonite World Review and The Mennonite. I view a lot of the world around me through a historical lens. I found that this worked well as a journalist.

What got you interested in writing the history of Indiana-Michigan Mennonite Conference?

Indiana-Michigan was looking for someone to write a new history of their conference. In addition to my interest in Mennonite history, I had just moved to Indiana a couple years before. I knew enough about Indiana-Michigan to know this would be some fascinating stuff. And it has been, more than I ever anticipated. In many regards Indiana-Michigan has been central to events in the broader Mennonite church, even internationally.

What’s the span of chronology in In Pursuit of Faithfulness?

I start with the arrival of the first Mennonite and Amish settlers—in the 1830s and 1840s. I set the stage with the Native American presence, and the process in which Indiana was appropriated by whites. The towns of Elkhart and Goshen were already in existence when Mennonites first arrived. The year 1916 is the beginning of the current incarnation of the conference. It began as a merger between a previous Indiana-Michigan Mennonite Conference and Indiana-Michigan Amish Mennonite Conference.

The history ends in 2001, when the Great Lakes proposal failed to combine several Mennonite conferences. It includes an epilogue covering some “loose ends” since 2001.

Are there themes that carry on through Indiana-Michigan history, or do they change over time?

One theme is reflected in the title: In Pursuit of Faithfulness. Those who make up the conference had their values and understandings. They wanted the conference to be the best representation of their understanding of Mennonite faith, of Christianity. They often disagreed on what that was. In Indiana-Michigan, conflict has always been a big part of the conference. They had these commitments to faith that they felt strongly enough about to tussle over them.

Another theme of the book is that in many regards, the history of Indiana-Michigan Mennonite Conference is the history of the Mennonite church. For example, John F. Funk played a role in the beginning of Goshen College—which later helped birth Associated Mennonite Biblical Seminary. Funk also helped launch Mennonite Board of Missions (now Mennonite Mission Network). Because of him, we have MennoMedia and Herald Press. With churchwide Mennonite Mutual Aid (now Everence), the people most instrumental in starting it were Harold S. Bender, Guy F. Hershberger, and Christian Graber, three people affiliated with Goshen College.

Why were Sunday school programs important?

From the late 19th century onward, mission and outreach has been significant to this conference’s identity. Sunday schools were an evangelism tool. They were placed in places where the church wasn’t—the first step in church planting. Later, Bible schools served that function. The number of church plants over the years is impressive. Indiana-Michigan had its own conference mission board, which was very active.

Given the location of many Mennonite church offices and education institutions in the region, is this a story that’s driven by biographies of strong leaders?

No getting around it: H. S. Bender and John F. Funk are pretty prominent, from the 1870s to first decade of the 20th century. But though Indiana-Michigan had a lot of strong leaders, not everything is attributable to them. A lot of people and forces were at play here.

For example, Willard Handrich, pastor of Grand Marais (Mich.) Mennonite Church got the ball rolling that resulted in the elimination of closed communion. In the early 1960s, a woman who had grown up in Grand Marais and now lived elsewhere attended the Grand Marais church whenever she was back. One morning the bishop refused her communion, as she was not a member of the church. It was traumatic for her, and for Handrich. He said, “We won’t serve anyone communion then.” He wrote letters to conference leaders—it took years of wrangling, but he got permission to perform his own communion services. He was not a powerful conference leader, but he left his mark.

The book includes sidebars and stories that provide understanding. For example, one story is Teofilo Ponce, the pastor of Iglesia Menonita del Buen Pastor in Goshen, who grew to faith at Lawndale Mennonite Church in Chicago, an outgrowth of the first Mennonite mission, initiated by John F. Funk and Prairie Street Mennonite Church. His pastorate in Goshen was a legacy of that mission impulse. I include a sidebar about the role of ministers’ wives in the 1920s and ’30s. And another about Christiana (Buzzard) Holdeman, a prominent family matriarch in the 19th century who lost her husband in Ohio. She’s the grande dame of Indiana-Michigan Conference. The Church of God in Christ, Mennonite [Holdeman Mennonites] was started by her nephew.

What has been the role of Indiana-Michigan in the broader Mennonite church? Is it a leader among conferences?

Indiana-Michigan hosted the 1948 Mennonite World Conference, the first after World War II. Indiana-Michigan has had some ardent conservatives, traditionalist constituents, and you have a lot of people who came from the outside to teach, or to work at the mission board. This puts Indiana-Michigan front and center in some conflicts. The whole homosexuality membership issue—Southside Fellowship and Assembly Mennonite congregations tackled that early; they weren’t longstanding traditional rural churches.

Other conflicts include changes in worship style and attire. Goshen College was closed in 1923 and reopened in 1924—partly because of students and faculty members from outside with different understandings of what one did or didn’t have to wear. Professors argued, “My church membership is in Ohio, we don’t require this.” Students from Illinois said, “We don’t wear that kind of prayer covering at home.”

What surprised you as you dug into this history?

One thing that surprised me was the intersection of almost every Mennonite group in North America here in Indiana-Michigan. Splinter groups, Old Order Mennonites, the Missionary Church. The role John F. Funk played in the Russian migration of 1870s; any Russian Mennonite group has a connection here.

The whole closed communion thing also surprised me; I realized how central the communion service is to group identity. A lot of this is not just Indiana-Michigan but the broader Mennonite church. Another example is the 1948 Mennonite World Conference: the Mennonite Church almost didn’t participate in that because of the last vestiges of that fundamentalist stream. Orie O. Miller, a native of Indiana-Michigan, and H. S. Bender stepped up and helped it happen.

Do you find these historical figures and situations sympathetic?

A lot of them, yes; not all of them. One of the most flawed individuals was John F. Funk, whom I hold in high esteem.

A common thread is that through everything that happened here, because they took their commitment to Christian and Mennonite discipleship so seriously, they felt “We will have to fight about this.” The topics were different: attire, fundamentalism, divorce and remarriage, LGBT issues, the charismatic movement in the early 1970s. Conflict is really not a new phenomenon.

Sometimes Mennonites seem to be moving away from their past history as fast as they can. Why in a 21st-century world should we care about this church history?

You have to be rooted in something. Your response to what that is defines you. We have to know our origin to know what we should be now. You have to have a frame of reference. To decide who you are as an individual, group, conference, denomination, you have to define your starting point. What makes us who we are, what made us who we are? Then you react and say, “I like this part; I don’t like that part.” But if you eliminate it, pretend it doesn’t exist, you’re functioning from a vacuum.

I see through a historical lens. I find it inconceivable to identify yourself without that historical understanding.

In Pursuit of Faithfulness is available from the MennoMedia store, Amazon, and other online sources.

For more information on this press release: