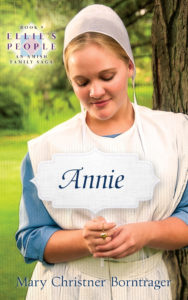 HARRISONBURG, Va., and KITCHENER, Ont.—With the release of Annie, Herald Press concludes the popular series of books about Amish life called Ellie’s People. Annie is book 9 of the series. The series has sold over half a million copies since its original release from 1988 to 1998, originally aimed for younger readers age 10 and up.

In this final book, Annie Troyer, born Pearlie Mae Streeter, is adopted into an Amish family. Annie finds love and security there, but has a hard time adjusting to Amish customs. Her new sister Lucy is jealous of the attention Annie receives, and Annie must make choices about where her loyalties lie.

Fans of Amish fiction and of Laura Ingalls Wilder’s Little House series will enjoy Annie and the entire Ellie’s People series. The books open a window to the Amish faith and way of life for non-Amish readers. Annie, like the other books in the series, features a new Pennsylvania Dutch glossary and family tree for the families featured in the books.

Author Mary Christner Borntrager brought firsthand experience to her accurate portrayals of Amish life. She was born to Amish parents near Plain City, Ohio, and lived her first 20 years among the Amish. She called her books “faction”: fiction based on the facts of her childhood and youth. 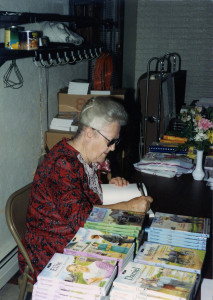 Born seventh in a family of 10, Mary came to writing through the classic avenue of storytelling. Stories about her Amish youth, told to her children and grandchildren, sparked the idea for the Ellie’s People books, which Mary began writing at age 67.

Reading Mary’s books is “like having a cup of tea and chatting with a friend,” said her daughter Kathryn Keim. “She wrote about people’s lives just like hers: the struggles, joys, hopes, and fears.”

Nine of the Ellie’s People books have been rereleased to provide a new generation with entertainment, wisdom, and inspiration. The covers and some terminology have been updated, but the traditional stories remain. “The series is a wonderful legacy to remember how one woman touched many lives through her books and her life,” said her daughter.