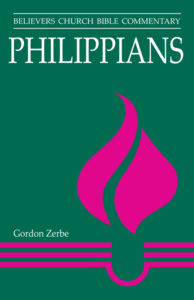 HARRISONBURG, Va., and KITCHENER, Ont.—What if, rather than only reading Philippians, Christians allowed Philippians to read them?

In this 31st volume in the Believers Church Bible Commentary series, New Testament scholar Gordon Zerbe challenges readers to allow Paul’s prison letter to interpret their own lives—not by extracting lessons out of historical and cultural context but by imagining themselves in the ancient Roman world.

Zerbe says that to understand Paul and his beloved and beleaguered congregation in Philippi, we must undomesticate Paul. We can learn to see him as a leader transformed by grace and passionate about enlivening patriotic loyalty to Jesus alone.

Zerbe notes that the gospel does not pertain merely to the individual, private, and spiritual aspects of life. “Political matters (broadly speaking) are spiritual, and spiritual matters are inescapably social (and thus ‘political’),” Zerbe explained in an interview. He says that Philippians is for many the most treasured of Paul’s letters.

The Believers Church Bible Commentary series is designed to be accessible to lay readers, useful in preaching and pastoral care, helpful for Bible study groups and Sunday school teachers, and academically sound. The series also carries an underlying Anabaptist reading of Scripture. The volumes are a cooperative project of Brethren in Christ Church, Brethren Church, Church of the Brethren, Mennonite Brethren Church, Mennonite Church Canada, and Mennonite Church USA.

Zerbe holds a PhD from Princeton Theological Seminary and degrees from Western Washington University, Mennonite Brethren Biblical Seminary, Tabor College, and Columbia Bible College. He is the author of Citizenship: Paul on Peace and Politics. After growing up in Japan as a child of mission workers, a highlight in his career was a series of years (1996–98, 2002–04) in the Philippines as visiting professor at the Silliman University Divinity School under the auspices of Mennonite Central Committee.

What do you mean by “allowing the book of Philippians to read us”? How is that done?

That’s another way of saying that we want an ancient letter in the New Testament to speak to us today. It highlights that Paul’s wisdom in the letter can mirror back to us some of our own circumstances and questions. Once we live into the world of that text, we can look back at ourselves in a new way. We tend to see our own world differently only if we’ve been truly transported mentally or geographically into another.

As an interpreter of Scripture, I’ve become increasingly aware of how my own story shapes the process of reading Scripture. All of us come to the Bible with some kind of bias, or with a preformulated understanding of what the text is all about, or with a set of questions or concerns that we find most important. But as a Filipino colleague once suggested to me, the point of interpretation is to seek to understand the bias of the text itself, while becoming self-aware of our own biases that we inevitably bring to our encounter with Scripture. My four years of working in the Philippines helped me to become more self-aware of my own biases, and for that reason I’ve dedicated the commentary to my former colleagues and students there.

What is meant by “theopolitical”?

It’s shorthand to highlight that the spiritual and the social dimensions of life are inseparable, and that the spiritual and social aspects of the gospel are integral. The social dimension includes the communal, economic, and even political domains of life. By “political” I speak not of matters of partisan politics, but what it means to be a part of a broader public, constantly considering questions of one’s primary allegiance.

To say that being a Christian involves a “citizenship,” as Paul does in Philippians, is to make a “theopolitical” claim. The point is to “make Jesus ‘Christ’ again” (a statement I heard recently, playing on someone else’s assertion that the main task was to make some state “great again”).

What does kingdom allegiance and messianic citizenship say to today’s culture in North America?

Paul presents the claims of the gospel of Jesus as a “citizenship,” something that a long history of English translation has somehow covered up. We can hardly avoid not thinking through what this means for our other, earthly citizenships, loyalties, and identities—how our Christian citizenship becomes the most fundamental aspect of our identity, loyalty, and practice. Each place we find ourselves in—family, region, culture, nation—presents unique challenges. Christ helps us to “unplug” from competing, narrow loyalties in a community committed to the good of all.

Recently I’ve come to appreciate Paul as a “migrant.” Paul is a migrant not only in a geographical sense (whether in his upbringing or in his adult ministry), but also in an intellectual-spiritual sense. As a migrant, he is a cultural hybrid, even wrestling internally with different aspects of himself and his loyalties.

My own personal story has caused me to be interested in questions of “citizenship.” Among my first memories growing up (as a missionary kid in Japan) was that I was a “foreigner.” Later, being moved around as a preacher’s kid in both the U.S. and Canada, the issue of what is the meaning of citizenship was natural. I once prided myself in being content to be a mere sojourner, a displaced person, living many years as an immigrant in Canada, while considering my formal citizenship to be the USA that was bequeathed to me as an accident of birth. When I eventually became a Canadian citizen for practical reasons as our family travelled internationally, I was troubled with the theopolitical implications of having to make an affirmation of loyalty to the Queen and her successors—that is, to the state of Canada.

What are other themes in the commentary?

I emphasize four main themes: citizenship, partnership, high-low inversion, and joy. What it means to fully realize the vision of partnership and mutuality that Paul articulated, and what it means to faithfully practice the way of being in solidarity with the lowly are imperatives as relevant today as they were two thousand years ago.

How would you suggest adult Sunday school classes study this volume?

Sometimes it’s important not to lose the forest for the trees. For that reason, a shorter, more intensive engagement with Philippians and the commentary might be good, such as for a quarter.

The selected readings at the end of the commentary include a reference to a brief discussion guide on Philippians by prolific New Testament scholar N. T. Wright that I think would work well with this more in-depth commentary. I am in sympathy with the approach that he takes in that guide; some of his earlier scholarly work on Philippians had a decisive impact on my own thinking.

What would be the takeaway for someone just reading this volume because they want to understand Philippians better?

I would suggest, perhaps oddly, that someone start by reading the essays at the end of the commentary. My own views on the letter have been shaped by what I know now about the social and political context of the letter, and it’s that kind of background awareness that helps us read with new lenses and openness.

Why did you agree to write this commentary?

Since the days of my doctoral studies at Princeton, I’ve somehow become absorbed in work on Saul/Paul and his letters. So this was a great opportunity to deepen my understanding of one letter. In addition, I was already convinced that some new thinking about Paul and Philippians could make for an exciting new venture in a commentary.

Philippians and the other volumes in the Believers Church Bible Commentary series are available from Herald Press at 800-245-7894, the MennoMedia webstore, Amazon, and other online sources.